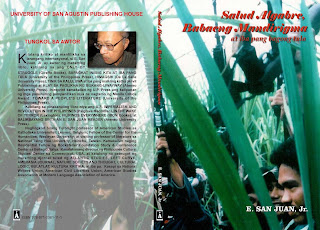 Metakomentaryo sa Pagkakataon ng Kolokyum Ukol sa “The Places of E. San Juan, Jr.”   E. San Juan, Jr. Polytechnic University of the Philippines philcsc@gmail.com Abstract In a provisional synthesis of his lifework, E. San Juan, Jr. surveys the issues and aporias that define his critical oeuvre. He warns at the outset against the narcissism of autobiographical acts, or what he calls the selfie mode. In locating himself, San Juan uses instead the historicizing lens. In this metacommentary, San Juan locates his life project between his birth in 1938, which saw the defeat of the Republican forces in Spain and the rise of fascism in Germany and Italy, and the new millennium marked by 9/11 and imperialist terrorism. He begins with the class background of his parents and moves on to discuss his years as an undergraduate at the University of the Philippines-Diliman; his graduate education at Harvard; his collaboration with Tagalog writers; his radicalization as a professor at the Un
Post a Comment
Read more
More posts