FASCIST VIOLENCE AND MILITARY BARBARISM OF THE ARROYO REGIME 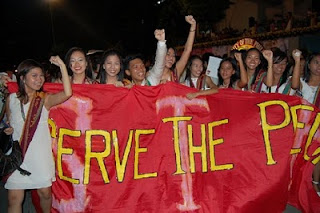 ARROYO’S DESPERATE SCHEME: TORTURE OF MORONG “43” A REHEARSAL FOR EMERGENCY RULE by E. San Juan, Jr., Philippines Cultural Studies Center In less than three months from now, de facto president Gloria Arroyo of the Philippines will step down from power—unless martial-law or emergency rule intervenes. Or the failure of election is declared due to the breakdown of the automated voting/counting system plagued with problems. On May 10, either her critics Senator Manny Villar or NoyNoy Aquino, son of the late Corazon Aquino and Sen. Benigno Aquino, takes the helm. Her own chosen candidate, Gilberto Teodoro, a U.S.-sponsored candidate, has neither charisma nor achievement to propel him to third place, behind ex-president Joseph Estrada, and assorted oligarchic caciques. What needs careful analysis and vigilant monitoring is the way events are unfolding in seemingly wayward but tendentious fashion, as the May election looms. What seems accidental or gratuitous actually hides pre
Post a Comment
Read more
More posts