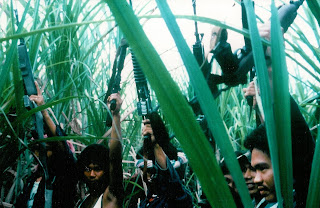 FIRE-STORM FROM THE BOONDOCKS:  On President Duterte’s  Logomachia and Subaltern Realpolitik in the Philippines by E. SAN JUAN, Jr. Emeritus Professor of Ethnic Studies & Comparative Literature; Professorial Lecturer, Polytechnic University of the Philippines “A howiing wilderness” was what General Jacob Smith ordered his troops to make of Samar, Philippines. He was taking revenge for the ambush of fifty-four soldiers by Filipino revolutionaries in September 1901. After the invaders killed most of the island’s inhabitants, three bells from the Balangiga Church were looted as war trophies; two are still displayed at Warren Air Force Base, Cheyenne, Wyoming. Very few Americans know this. Nor would they have any clue about the 1913 massacre of thousands of Muslim women, men and children resisting General Pershing’s systematic destruction of their homes in Mindanao where President Rodrigo Duterte today resides.  Addressing this dire amnesia afflicting t
Post a Comment
Read more
More posts