US TROOPS FIGHTING MORO INSURGENTS IN THE PHILIPPINES 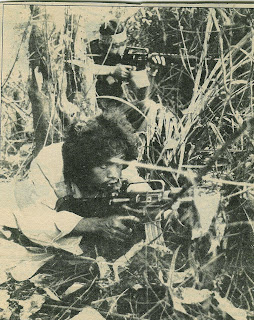 US SPECIAL FORCES, "EMBEDDED" IN ARROYO'S FASCIST REGIME, ENGAGE MUSLIM INSURGENTS IN THE PHILIPPINES by E. SAN JUAN, Jr. Philippines Cultural Studies Center, Connecticut, USA If Britney Spears recently belted out her drastic warble of "sneaking into the Philippines, " can the PENTAGON Special Forces not be far behind to get a piece of the action? Before you can say "Yo Mama!" US troops are found already "embedded" since 2002 in the Empire's most Americanized islands where savage class wars have been raging for decades. By the last week of September, the total casualty figure surpassed three hundred as government troops (with their US advisers/trainers) and Moro (Muslim citizens of the Philippines) militants clashed in the southern Philippines. The scale of violence and magnitude of civilian suffering reached a crescendo enough to alarm the European Union, but not Bush, Condoleeza Rice, nor the two US presidential candidates. BBC
Post a Comment
Read more
More posts