US IMPERIALISM AND REVOLUTION IN THE PHILIPPINES-by E. SAN JUAN, Jr., published by Palgrave Macmillan 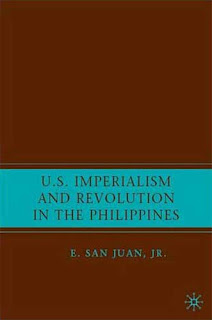 U.S. Imperialism and Revolution in the Philippines By E. San Juan, Jr. After Afghanistan, the Philippines has become the second battlefront in the "global war on terrorism." U.S. troops have intervened to fight the Abu Sayyaf, a CIA creation, as well as the Communist-led New People's Army. This is a challenge to all Americans: will they allow U.S. imperial domination to continue? This book is a critical analysis of the social and political crisis of the Philippines under the brutal Arroyo regime. What are the stakes? Peace, social justice for 87million Filipinos and 10 million Moros, democracy, genuine independence, and the struggle for selfdetermination. [272 pp. / 1-4039-8376-3 / $69.95 cl.] "San Juan is one of the sharpest and most clarifying voices vis-à-vis Filipino/U.S. and Filipino/world relationships extant. He is an internationalist and political analyst of high morale. It’s about time his incisive theoretical summations are given broader access to st
1 comment
Read more
More posts